Pillar of Salt: A Daughter's Life in the Shadow of the Holocaust 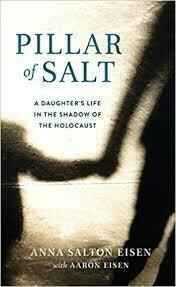 Pillar of Salt: A Daughter's Life in the Shadow of the Holocaust

Join us for our next program in our Power of Words Speaker Series with Anna Salton Eisen, author of Pillar of Salt: A Daughter's Life in the Shadow of the Holocaust.

As the daughter of Holocaust survivors, Anna Salton Eisen's memoir, Pillar of Salt: A Daughter's Life in the Shadow of the Holocaust, breaks down the barrier of silence that was intended as a protective shield for her parents and their children. From early childhood, Anna, as a second-hand witness to the Holocaust, felt overwhelmed by the unspoken but ever-present trauma of her parents' past. Her father, born as Lucjan Salzman, survivor of ten different concentration camps, is enveloped in impenetrable grief and his history encased in secrecy. But Anna is determined to look backwards, breaking through her father’s reticence to confront the unspoken terrors of the past. The entire Salton family embarks on a journey through Poland unlocking a history sealed in silence and buried by time. The Salton family's quest takes them to the towns where Anna's parents lived as children under Nazi occupation. The family returns to the ghetto where a 15-year-old Lucjan experienced his first selection and bid farewell to his parents before they were herded into a boxcar and sent to their deaths at the Belzec concentration camp. They continue their travels through the picturesque Polish countryside, still pockmarked by the remnants of former concentration camps and a spattering of Holocaust memorials. By the end of her odyssey, Anna acquires a new understanding of her legacy as a child of Holocaust survivors and how trauma is revisited upon subsequent generations. By revisiting those places of trauma with her father as her guide, Anna Salton Eisen's tour of terrors provide her with a new understanding of how her identity has been shaped under the shadow of the Holocaust. Anna confides that by looking back like Lot's wife, and by taking in the whole story, "I could carry the pain of the Holocaust and find there is more to me than a pillar of salt."
Building on Salton Eisen’s own background as a Holocaust author—she co-wrote The 23rd Psalm: A Holocaust Memoir with her father George Salton—Pillar of Salt completes their story.

Support us with a donation.